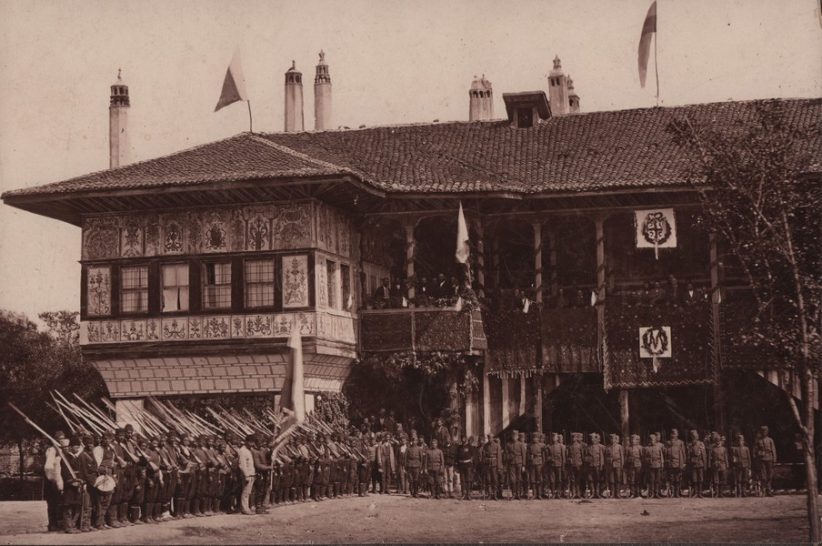 In addition to 8 mosques, 10 tekki, konakas, madrasas and amams, Leskovac had three barns before the liberation from Turkey, among which the most beautiful was the Shashit-pasha sarai, one of the most beautiful buildings in the then Turkish kasaba, of whose history it has a lot of data, but this unsaved cultural and historical monument remains immortalized in a photograph by an unknown author and it is the oldest of over 10,000 photographs in the collection of the National Museum here.

The photo was taken on April 23, 1882, at the welcome of the Serbian King Milan, who had been touring the liberated regions of the Turks since Serbia was proclaimed a kingdom. The king was welcomed by the Serbian army, representatives of the municipal authorities and the more prominent Leskovans, just in front of Shashit Pasha’s Sarajevo or Konak, as stated in some records, which then housed the Municipal House and the judicial administration.

Historians claim that Shashit Pasha’s residence was, in fact, „the most beautiful Turkish residence in Serbia“

The former pasture, then, was located in the center of Leskovac, where part of the former, also, Leskovac fairground is located today. It was recorded that it was built in 1790 and demolished in 1890. If the Leskovci had preserved it, it would be today the oldest building in Leskovac.

This saraj (a castle in Serbian BC) also aroused the attention of travel writer on the liberated southern Serbia of Mita Rakic, father of Serbian poet Milan Rakic.

“The landmark in Leskovac is the Šašin-pašin residence, which now houses a municipal court. The building is 90 years old, in two colors, in a courtyard that is a real field, and in which there is another one, more recent but not better. The tree, they say, was pulled from the Krusevac Naja. Whoever comes to Leskovac needs to see that old rope, so they will admire it, especially in the two separate rooms, with ends, carved backbone and a taste of Eastern and fine and artificial ceiling construction, ”Rakic ​​wrote.

Leskovac was freed from centuries of Turkish slavery on December 23, 1877.

Contemporaries have noted that in the first part of the unsaved building in two colors there was a pasha servant and administration, while in the second color there was a pasha dwelling and selamluk, and in the right wing a pasha harem. There were 24 departments in total.

„The whole interior was decorated with carvings and Eastern ornaments,“ he writes in rare notes.

Unfortunately, only one photo speaks of him today, which is not enough for an architectural appreciation.

„In any case, if the Shashit-Pasha Saraj were preserved, it would be a building of the invaluable historical and cultural heritage of Leskovac, attractive to historians and architects, but most of all to tourists,“ said Mira Ninosevic, historian and director of the National Museum in Leskovac.

For the last time, Leskovcans could see a photo of „the most beautiful Turkish building in Serbia“ at an exhibition at the Leskovac Museum in 2007. 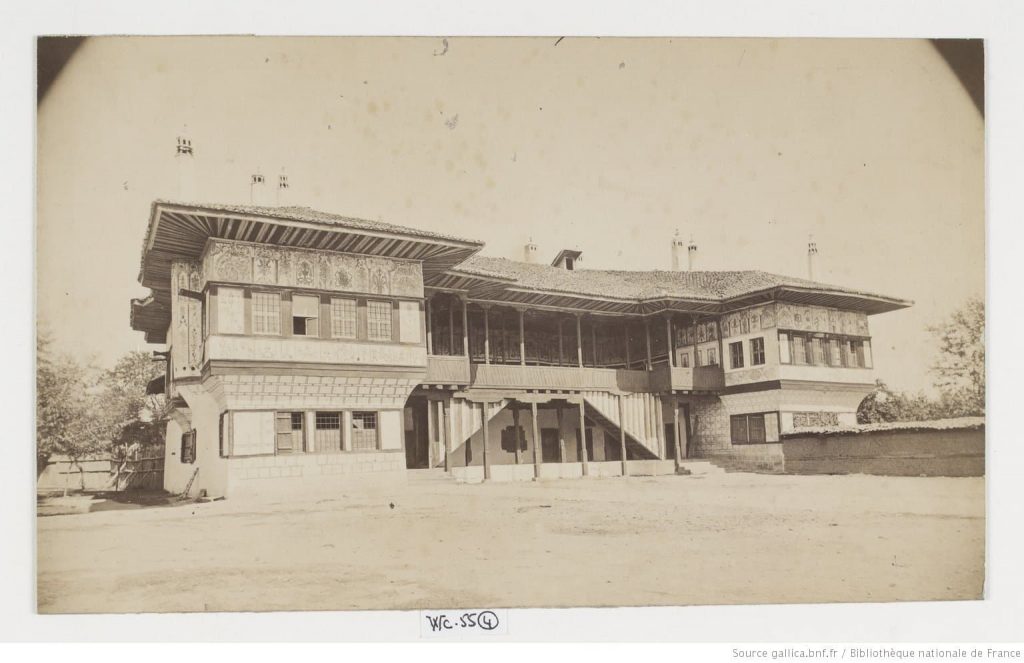 Shashit-pasha was an ignorant but cruel and vigilant ruler who granted Pashtaluk in this area for life. At the end of the 18th century, he hired Greek masters and builders to build the sari. It was built for 5 years, as expected, with the money of the Serbian paradise, that is, by means of a special class on the population of the entire Haladz Hisardžik – the Krusevac pasaluk.

Shashin-Pasha’s saraj, or konak, has „lived“ exactly 100 years since it was demolished in 1890. The Gymnasium was built there, which was also the most beautiful building in the liberated southern parts of Serbia at that time, and was destroyed in an Allied bombing when American bombers razed the city to a defenseless city, that is, to destroy its city center and changed the appearance of Leskovac all the time, so it is clear that the Turkish barn, which the local population experienced as „a mockery of our town, the abyss of tyranny, slavery and obscurantism“, would not „survive“ without being demolished by the Leskovians.

„From this point of view, its demolition was justified, but from the point of view of the evaluation and preservation of building monuments, it was a delusional word and thought,“ the latter historians noted.

In addition to this Sarajevo, in the time of the Turks, Leskovac had two more – Greek Saraj and Harem Saraj, but far smaller and more significant in its beauty and splendor.

The Greek saraj was a vacuum caravan saraj, the only one mentioned in Leskovac with this function. It was located in the Greek Mahala and had 14 divisions in the upper and lower colors. And it was demolished at the end of the 19th century.

The Harem sarai or „Mali sarai“ and „Haremluk“ with 12 divisions were erected in the early 19th century and were owned by Hasan beg, who is little known, but is assumed to have been a rich and powerful man and one of the managers of the Leskovac Cadillac.

One year after the expulsion of the Turks, Leskovac had 2,061 houses, 9,718 inhabitants, of which 167 were Jews, 183 Turks, and 244 Roma. As early as 1882, the beginnings of the first industry in the town on Veternica emerged, making this city, between two centuries of world war, a former industrial and commercial giant, one of the largest in the Balkans.

The rapid development of the city was accompanied by modern architecture. Now a richer layer of Serbs is erecting new, modern buildings, hotels, banks, schools and their own houses and palaces, making the center of Leskovac one of the most beautiful in southern Serbia.

It covered the ashes for less than half an hour on September 6, 1944, and from the ashes the city rose in the following decades, built in a social-realist style, and that architectural style still „adorns“ the center of Leskovac with which the remaining structure between the two world war, the „golden age of Leskovac“, as historians call it from today’s time distance. 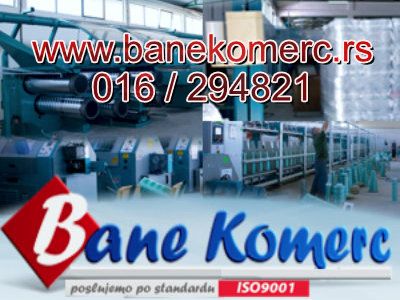 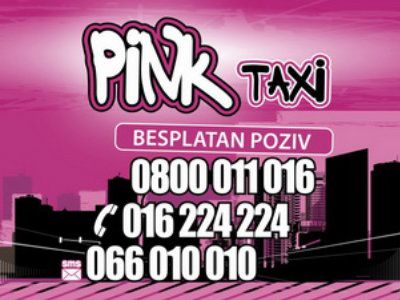 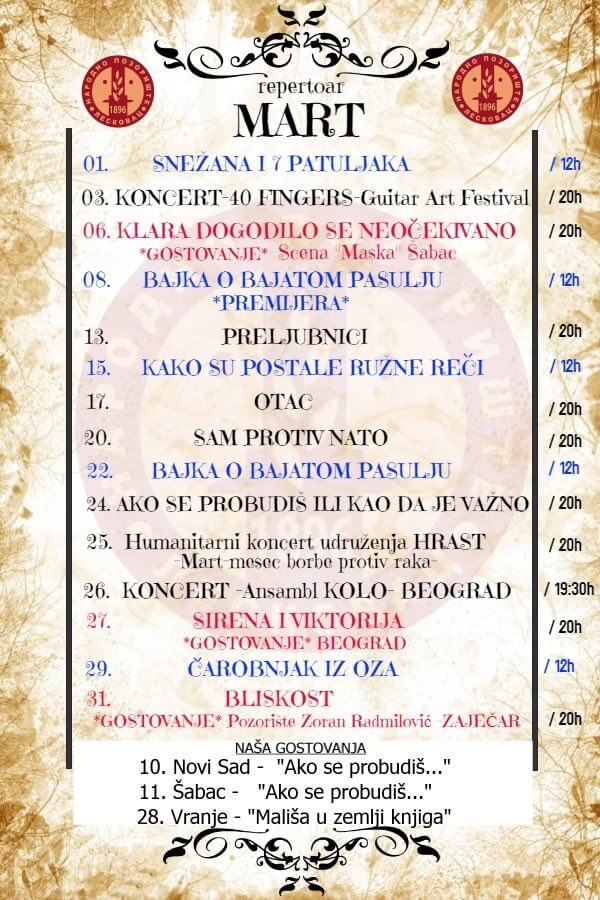 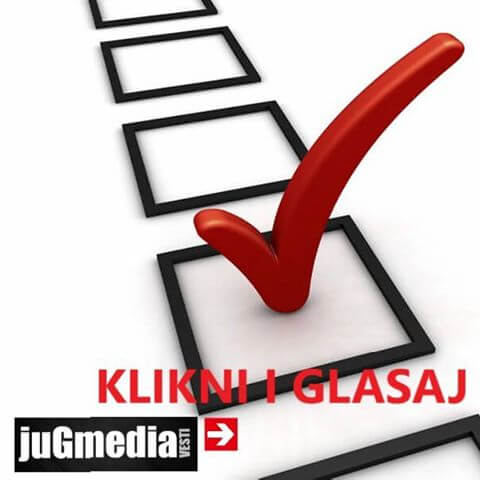